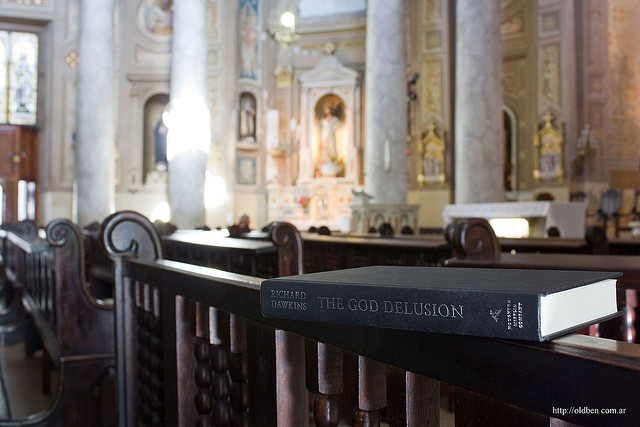 It’s an old war. It’s tiring, and some of us want the troops to come home. That religion and science are at odds with each other was an anthemic debate, even a self-evident truth, in the 20th century. We couldn’t find a peaceable truce and its ugly remains have spilled into our day and age. Both religion and science have their fair share of bloodhounds, which makes the battle as dirty, as it is unnecessary.

When he heard the news, my father called me on the phone and declared, “They found it! They found the God particle! This confirms the Bible!” He quoted Hebrews 11:3, which says, ‘By faith we understand that the universe was formed at God’s command, so that what is seen was not made out of what was visible.’ He explained, “The matter is what is seen and the God particle is what is invisible”.

Whether the writer of Hebrews knew anything about subatomic particles or not, my Dad seemingly found a bridge in the Bible. I wish more Christians shared his enthusiasm.

But we’re never excited for scientific discovery. If anything, we’re fearful—quietly slinking away into our silent caves of denial, waiting for the storm to pass. We huddle up together, hoping that no ‘thinking person’ will stop to ask us how we feel now that another nail has been hammered into the coffin of religion, as the BBC has reported. But this is a media manufactured anxiety. God Himself is not insecure. There’s no need for us to be intimidated by the polemic that God is dead. Again. If our Bible has taught us anything, its that if God is indeed dead, its only a matter of time before He is risen.

In his New York Times bestselling book, The Reason for God, Timothy Keller’s chapter on whether Science has disproved Christianity has special significance for this week’s discovery of the ‘God particle’—a term that physicists dislike, perhaps because of its misleading theological connotations. He says, “It is common to believe today that there is a war going on between science and religion. One of the reasons for this perception is that the media needs to report news events as stories with protagonists and antagonists…These battles give credibility to the claims of Dawkins, Harris, and others that it is either/or—you can be either scientific and rational, or religious.”

But its simply not true. Stephen Jay Gould, the late Harvard scientist and evolutionist, who was himself an atheist, says, “Either half my colleagues are enormously stupid, or else the science of Darwinism is fully compatible with conventional religious beliefs – and equally compatible with atheism”. In his book The Language of God, Dr. Francis Collins upholds evolutionary science and critiques the Intelligent Design movement (popular among evangelicals). However, he believes that the fine-tuning, beauty and order of nature points to a divine Creator and describes his conversion from atheism to Christianity.

We are children of divorce. Science was once married to religious belief. It was the passageway that took us deep into the mysteries of God’s world and gave us reason after reason to admire and adore our Creator. The poetry, history and theology of Genesis has been hijacked by religious zealots and abused by scientific predators.

Its tragic and ironic that some of the smartest people in the world cannot tell the difference between what is scientific and what is philosophical. That the God particle has been discovered is a scientific discovery that gives us universal cause for celebration, whether you are religious or scientific or just a teenager who would rather watch Gossip Girl. That the discovery of the God particle naturally ought to translate into atheism reveals a pre-existing philosophical prejudice and betrays the open-mindedness of honest scientific enquiry. The truth is the discovery is compatible with atheism, as well as theism. In fact, as a religious person, I’m ecstatic about it – as I ought to be. The beauty of the Bible is that its truths transcend our scientific squabbling so that you can celebrate the wonders of God’s world, without constantly fighting about it.

Even more so, ‘unscientific’ Biblical miracles are not without purpose. Keller says, “You never see him [Jesus] say something like: ‘See that tree over there? Watch me make it burst into flames!’ Instead, He used miraculous power to heal the sick, feed the hungry and raise the dead. Why? We modern people think of miracles as the suspension of the natural order, but Jesus meant them to be the restoration of the natural order. The Bible tells us that God did not originally make the world to have disease, hunger, and death in it. Jesus has come to redeem where it is wrong and heal the world where it is broken. His miracles are not just proofs that He has power, but also wonderful foretastes of what He is going to do with that power. Jesus’ miracles are not just a challenge to our minds, but a promise to our hearts, that the world we all want is coming”.

In the movie, Prometheus, a group of scientists travel into deep space in search of their alien creators. In a poignant scene, one character points to a cross around the neck of another and asks whether she needs it anymore, since they had found their creator. Without skipping a beat, she retorts, “And who made them?”. There will never be a discovery that removes the need for God. He exists for more reasons than merely telling us how we got here. He tells why we’re here in the first place. To answer that question, Richard Dawkins simply isn’t good enough.

See also: For the Sake of Argument |  A quick look at why a growing number of Christians now believe in God and Evolution